Frugal Honey on ANC On the Money 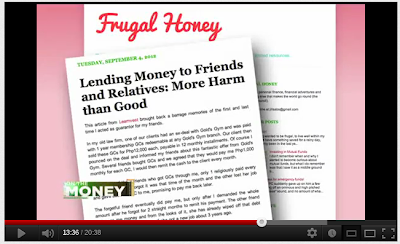 When Salve Duplito tweeted a question about lending money to friends or family, I responded by saying that it was usually a big mistake and look, I even wrote about it here and sent her a link to this post (epal much?). A few hours later, ANC On the Money asked if they could quote portions of my post in their show. I asked for the terms of the exposure and my talent fee, oh what the heck, I said yes in a heartbeat!

We don't get ANC on our cable and so I had no clue if the episode actually aired until a reader sent me a link to the episode.

That day's guest said that the odds of only 1 out of 3 paying a debt is fairly normal and my mistake was in failing to conduct due diligence before lending money to my friends. I actually  didn't know what to make of that because how exactly do you conduct a due diligence study on your friends?

With the one who lost her job, I really had no inkling that she would renege on her debt. She would always pay her share of the tab during our night outs and never tried to mooch money off me, so I honestly had no clue that that would happen. But looking back now, maybe I should have made them sign an undertaking, even a one pager, just to make the deal more official.

As for the other one, he really was just forgetful and in fairness, he did pay me when I demanded the whole amount.

Anyway, lessons have been learned and I am still not convinced that being a guarantor is a good idea.
Labels: Psychology of Money