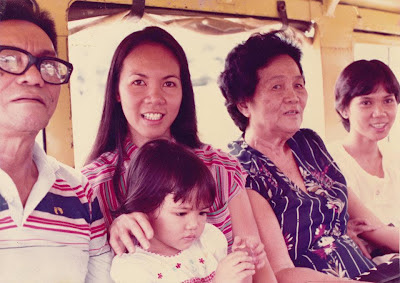 My two grandmothers and grandfather were public school teachers, while my other grandfather was a fiscal (or public prosecutor as we call them now). For the life of me, although they never went on lavish vacations abroad or carried around designer items, I was always under the impression that my grandparents were rich. Money was never an issue with them, except for my Lola Teresa who was an amazing spendthrift and who would seriously consider every purchase she made, from bulbs of onion to ship fares, although I later on found out that this was partly due to her OCD.


We usually never talked about money, probably because there was barely just enough of it to go by. But I never ever felt poor or deprived when I was with them. Maybe it's because I always felt loved and was raised in the "let kids run wild until they get tired enough to drop straight into bed" school of thinking.


My Lolo Ange's generosity knew no bounds and we would run to him when Lola Teresa refused to give us 5p for candy. And instead of 5p, he would brandish a 20p bill and give it to us with much pomp and pageantry. Oh the riches!

I also thought that my paternal grandparents were rich because of the fact that they had a beach resort. But that beach resort was really just a few cottages and rooms for rent which provided work for whoever wanted work and acted as a venue for our family reunions. I guess I thought they were loaded because they sold ice cream and we could get as much popsicles and pints as we wanted with Lolo Mesyong's permission, as long as Lola Pesing wasn't looking. 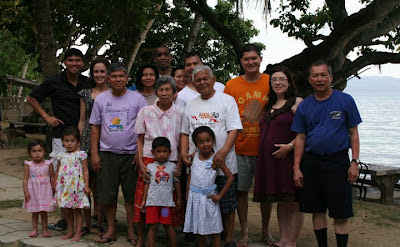 Suffice to say that that beach resort wasn't raking in loads of money either:p

So why did I grow up thinking that my grandparents were rich? Simply because they were happy and content, and in my young mind, I thought that you needed to be rich in order to attain happiness. But clearly that wasn't so. My grandparents lived on government pensions but were the happiest people I knew, and it's probably because they lived their lives well with honesty and integrity, trusting in the innate goodness of man and in God's wisdom.

From them, I learned that your name is the only thing of value that you can pass on to your descendants. That respect is currency that not even MVP's billions can buy. Though they are gone, I continue to follow Lolo Mesyong when he told us to do what you say you will do. I will always remember Lola Teresa for continuing to make empanada even if her fingers ached from arthritis, simply because we begged her to make them. I pluck courage from Lolo Ange's constant pronouncements that I was the "Pinaka bright! Pinaka maganda!" of all (even if this was also his constant spiel with my other cousins:p). And I am inspired by Lola Pesing's quiet strength and unwavering faith.

Happy teachers day Lolo and Lola (times two)! Please put in a good word for us up there.
Labels: My Financial Journey

Jillsabs said…
Thanks Teeyah! Teachers Day suddenly made me miss my grandparents, hence the sudden senti post.
October 6, 2012 at 8:50 PM