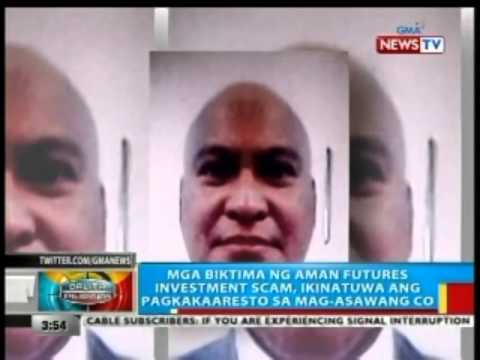 I've been following the Aman Futures fiasco for the simple reason that it hit close to home, both literally and figuratively.

Pagadian City, a sleepy city in Zamboanga Del Sur, has suddenly become a lead player in this year's biggest scam. My grandfather served as a fiscal in Pagadian for many years and I also spent time there when I was a toddler, as I'm a "laking lolo and lola."

I've been mentally composing my post on the Aman Futures scam for the past few days, and my thesis was that the investors simply didn't know any better. Most of the early investors were fishermen and market vendors who probably had no idea what the usual bank rates are, or the historical gains in money market placements. So when faced with a charismatic figure like Amalilio, the tacit approval of the LGUs (does anybody really believe Mayor Co's excuses?) and the unmistakable proof of wealth from their neighbors, the double your money offer seemed perfectly logical.

That's why I was disturbed when I read this article where an interviewee was quoted as saying: “From the start, I knew it was a scam and bound to burst like a bubble, but I took my chances,” and "“For those of us who have simple hopes and limited means, the idea of hitting [the big] time … is very attractive. It was just unfortunate that we came in late,”

I was particularly struck by his statement that it was just unfortunate that he came in late in the game, because he seems to be implying that there was nothing wrong with jumping wide-eyed into a Ponzi scheme, just as long as you join early enough. And that's why  I believe that a similar pyramid scheme will reappear in about 5-10 years time and we'll be reading the same stories about life savings lost and relationships ripped to pieces.

An uncle was a little hesitant with placing money in Mateo Group because he knew that a 20% monthly interest rate was too good to be true, to which my mom responded that she had no choice because she desperately needed the money for my bro's tuition fee in pilot school, and she added that it's really just a matter of taking your money out after a few months and not letting greed get the best of you.

I never did find out if my uncle invested with the Mateo Group, but my mom managed take out her capital a few months before the pyramid crashed. It would be nice if I ended this story by saying that my mom was wise enough to pull out because she didn't let greed get to her, but no. Her sister needed money that time, so without second thoughts, my mom took out her placement to lend it to her. So this story does have a happy ending after all, with love overcoming greed and my mom never investing in similar outfits ever again.

Sadly, the other stories don't have similar happy endings, but at least this should serve as a lesson learned to everyone who lost money and to everyone who read about the Aman Group scam. Because really, if it's too good to be true, run very, very far away.
Labels: Investing & Retirement Psychology of Money

Maria Abellanosa said…
OMG! I grew up in Pagadian too! My Papa was from Pagadian.

I've been lurking around your blog for some time now as it tackles on financial matters. I'm new to this blogspot thingy.

About AMAN, my friend actually told me about it. She said that she invested 30k, which was intended for her brother's tuition, she told me that my aunt invested too. So much hoopla about it. It was the height of the Aman Investment and I was fortunate enough to read a few investment books. I told them right away that it's a scam. I post tons of stuffs to inform my Pagadian friends and relatives to get out before its too late but nobody listened. Few months after, the pyramid collapsed and all I can say to them is "I TOLD YOU SO". It may sound arrogant but I was so disappointed. I exerted effort to inform them that it was scam!

My uncle lost 1M, my aunt lost her retirement fund.