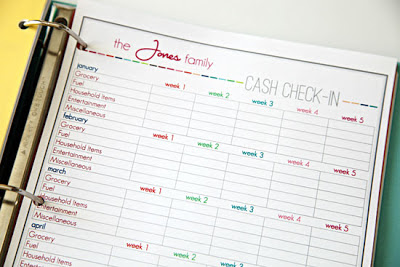 For this series, I tracked down our cash expenses using a printable from IHeart Organizing to see exactly what we were spending our money on, with the ultimate goal being to minimize our expenses. Since I forgot to account for January's expenses, let's lump it together with February shall we?

I have no idea why our restaurant expenses were that high in January, peaking at Php3,430 in week 4. But if I were to venture a guess, I would say that I probably had one of my "I'm feeling down about something so I will treat myself to good food" moods. And with my pregnancy, it's easy to give in to my eating out fancies since I always tell myself that I deserve it. I really should stop listening to myself.

Our entertainment costs were also a bit higher than usual because we watched Katy at CCP (Php1,000 per ticket). Considering the fantastic production and the fact that it was an all-Filipino show, it was very much worth it.

The Php700 miscellaneous expense was for housecleaning services. We agreed on Php500 plus Php100 transpo fee, but I was so happy with my cleaning lady's work that I threw in an extra Php100. I know that Php700 for 5 hours of work is a bit too high, but that's just dinner for us while that's 2 weeks worth of living expenses for her. So no, I will not play the cheap card with my cleaning lady.


Hmmm....it looks like our January eating out budget was just average after all, since February also hit the Php6,000 mark. Note to self, cook more and limit eating out!

Our fuel expenses also went through the roof this month (my monthly fuel budget is only Php4,000) because my hubby had to make several trips in Caloocan and Quezon City for his bike restoration project and meetings for his cause-oriented group.

February was also the month when I bought a cheap tablet for Php5,500, which accounted for the majority of the Php6,300 expense tallied for entertainment. No regrets whatsoever though because not only do I get my visual and creative fix with my tablet, it has also reduced the clutter in our tiny house since now I don't have to buy hard copies of magazines and books.

As for the miscellaneous expenses, two people I know died early this year so a part of that was donated as abuloy, while another part went to buying makeup and skin care stuff. Death and products, who would have thought that they could co-exist in one sentence?:p

Looking at the past two month's expenses leads to the inevitable conclusion that we should stop eating out as often, or at least set the budget to say Php4,000 a month, to make it more manageable. Also, I don't plan on buying any gadgets or makeup any time soon, so our entertainment and miscellaneous expenses won't be as high for March.

Sigh. Promises, promises. Let's see if we will fare better in March.

Our expenses also went down once we limited eating out in restaurants, so I guess that's really a common big expense.