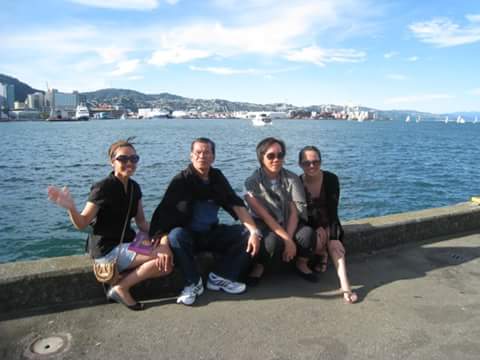 I read somewhere that 90% of our values are shaped by our environment, with 99% of that 90% shaped by our parents. So you know how the whiners keep  pointing to their parents as the source of their misery? They do have a point to some extent, but once you get past a certain age, whining about your lot in life without doing anything to change it will no longer cut it. Suck it up and accept the hand you've been dealt with and then use that as your ground zero to create the life you want.

My financial education was very typical Pinoy, with some minor exceptions. My parents were not born into riches, had to work for a living but enjoyed some perks that they were always thankful and gracious with. They never really lectured us on money or talked about it in passing, unless it was my mom worrying out loud like clockwork on how she was going to come up with the cash to pay our tuition fee, the two mortgages on the house, car payments etc. etc.  And although they never said anything, when it comes to money matters, these are what I picked up from my parents.

These are the tenets I grew up with, but that doesn't mean I apply all of them in my life now. Seeing how my mom worked 24/7 and how she rushed to the bank every month, I refuse to get in debt for a house or for a car.

Also, while I love being part of a big family, I don't have my mom's sense of sacrifice and I still want to have time for myself and my dreams. That means two kids max, but with the many cousins living nearby, my kids will have a very happy childhood.

My dad is one of the most fulfilled people I know career-wise. He's a bureau director who gets things done and will be retiring without a scandal attached to his name (which is not really difficult to be perfectly candid because the DOH is not a goldmine like the BIR, Customs or DPWH). But most importantly, he enjoyed and found fulfillment with what he did, so while he kept on thinking of the pension he would receive, it was more like a prize at the end of his stay in government. I can't imagine what it must be like to work for 3-4 decades, wasting time day in and day out with the pension as your sole source of inspiration. What a sad existence that must be.
Labels: My Financial Journey Psychology of Money

Maria Abellanosa said…
To understand your money habit, you must know how people around you spend money while growing up. I find this tactic helpful when I was starting to be financially aware. It gave me a clear understanding on why I am behaving when it comes to money. With knowledge comes better understanding and with understanding, we can improve or come to terms with the spendthrift/tightwad monster within.

One thing I learn while walking down "money memory lane" is how my relatives show off but utang lang pala. When I was growing up, my aunt was really "rich in appearance but pocket is empty" mentality. I remember her telling us how important it is to let others see us doing well kahit pritong isda lang ang nasa bahay. I spent my teenage years believing that crap and I would spend my 2 years working for gadgets and depreciating stuffs. But now, I nipped that belief long time ago. I'd rather appear poor but with fat wallet.

The poverty mindset ends with me. :)

Jillsabs said…
I super agree with the "appearing poor but with a fat wallet" mentality. Who cares about what people say right? As long as my hair is neat, I won't be charged with public exposure and people won't cover their noses when I go near them, I'm good to go.
December 4, 2013 at 1:22 PM

blahblahblogchef said…
I also learned the fundamentals of money from my parents. My mom would always tell me that integrity must come first before money. My parents were not fond of taking personal loans. Kung anong meron, yun na yun. And if there was a need to borrow money, bayad kaagad.

I grew up in a middle-class family. My mother was a teacher and my father was a government employee (BIR). However, my father didn't mine gold. hehe. He may not have given us gold but, he gave us an untarnished name...our only yaman.
December 5, 2013 at 9:42 AM

how are your relatives after the typhoon? I hope they're all ok.

Jillsabs said…
I'd rather have a good name even if it means working for a living, over Napoles billions any day!
December 9, 2013 at 7:52 AM

Everyone is accounted for and doing well. Our province of Biliran escaped relatively unscathed, specially when compared with Tacloban. Some trees fell and some houses were ruined, but the death count (probably brought by the falling trees) was barely 10 and people were up and about almost right after the storm.