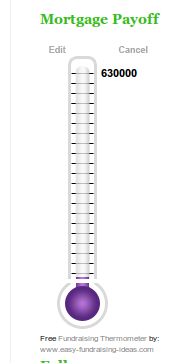 Just to show how serious I am with paying off our mortgage as quickly as possible, I added this debt thermometer from Easy Fundraising Ideas to my blog (it can be found on the right column, near the bottom) to track my payment status.


I made my first excess payment a few minutes ago, adding Php5,000 to the total amount due. And because prepayment is allowed by Pag-ibig, that extra Php5,000 will be applied to the outstanding balance.

There's something wrong though with the code I got though, because there's a blurred part near the thermometer base, so you can't see how much I've already paid. This is how it's supposed to look like: 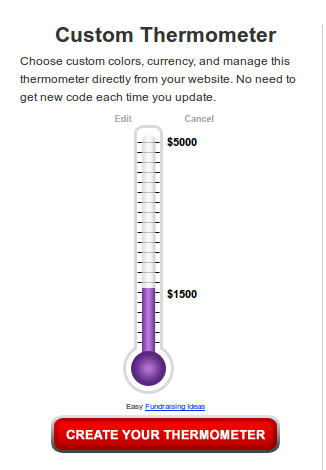 Anyway, the amount paid will eventually be shown the higher the "temperature" gets, thus creating another incentive to throw as much money at it as I can.

It's pretty doable really, although we probably won't be traveling as much this year in order to reach or exceed my target amount. Which is just as well since the baby is barely a year old and does not make the best traveling companion at that age.

Let's do this! Die mortgage die.

Lyn Lyn said…
Great job, Ate Jill! It gives encouragement for us that we are on our way of achieving our debt-free life from mortgage! =D On my part naman, I made an Excel worksheet of my Pag-ibig mortgage, and added on the prepayments that I do just so that my Excel workings are same as Pag-ibig's calculations. I can also re-invent the numbers (ie: if I pay xx amount per month, this will be the remaining mortgage nalng). It will be a sacrifice at an early stage (especially the travel fund), pero nothing beats the peace of mind of a debt-free life! :) Good luck!
January 25, 2014 at 1:58 AM

Jillsabs said…
Wow! That sounds like a neat program, unfortunately, my Excel powers are limited to treating it like a table:p

And I need the visual incentive of a thermometer to get me going. I'm crossing my fingers that I can pay it all off in 2-3 years time. Pa konti-konti lang, and before you know it, debt free na and pwede na ulit umutang for a new house!!!:P
January 27, 2014 at 8:07 AM