Rogue Shows You the Money 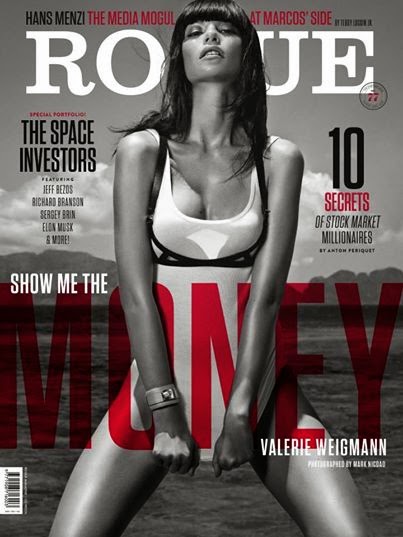 
Since then, I've looked forward to the travel, food and style issues. I always regret not buying a copy when I spot it in a bookstore, because Rogue magazine is not as widely available as the Summit publications. So when I finally decide to get a copy, it would usually be out of stock. I bought a digital version (the Bryanboy issue) once via Zinio, but it just wasn't the same. I missed the feel of actually leafing through the pages and poring over the articles. Even Rogue's paper feels and smells different than the other glossies, as they tend to be thicker with a matte appearance.

Anyhoo, enough with the reminiscing.

Rogue sent me their money issue with Valerie Weigmann on the cover, and my first thought was: Who is she?

Next was, who is this Anton Periquet person and how do I make him my best friend/ advisor for all things stocks related? He wrote "Confessions of a Stockbroker" and his takeaways from his years in the finance industry is something that stock investors should take to heart, whether you have Php5,000 or Php5,000,000 at stake. Take for example what he says on investment vs. speculation:

You have two companies, one "good" and one "bad". Both companies' stocks trade at P1 per share. On which of the two propositions below would you rather bet?

A. That the good company's stock will be higher than the bad one's at the end of five weeks.

B. That the good company's stock will be higher than the bad one's at the end of five years.

If you chose the latter, you have discovered without losing a cent a truth that many investors take a lifetime to learn- that the market is unpredictable in the short-run but rational in the long-run.

Investment is all about playing the long game. The careful practitioner seeks to minimize risk by removing speculation from the equation.

Another interesting article was how billionaires are looking upwards for their next big venture. As in literally upwards. They're betting their money on outer space.

Take note though that this isn't a money magazine like Money Sense. If you're expecting articles on which investment is the best, or how to make your money grow, then you might be disappointed. Rogue deals with money from a lifestyle angle, sharing stories about the moneyed set without actually focusing on dollars (or pesos) and cents.