Early Friday morning as I was getting ready for work, the hubby reported that our son suddenly threw up. But seeing that the boy was up and about, playing with his toys, we chalked it up to one of those mysterious toddler things and forgot about it. Then while I was at work, the hubby called to say that Ace wouldn't stop vomiting and that he would be bringing him to the pedia ASAP.

The pedia, whom the hubby refers to as "Dr. Nice Lady" because she really is the nicest person in the world, diagnosed the vomiting as being caused by a mere virus that should pass within a few days. Being a virus, there was no medication for what Ace had and the primary thing was to keep him hydrated and rested.

The boy slept the rest of the afternoon, but by the time he woke up, the vomiting started again and wouldn't stop. Even the vomit medicine that was supposed to settle his stomach was promptly dispatched with about half an hour after he drank it. We decided to bring him to the hospital to get him hooked to an IV because he was losing liquids fast and was already weak.


Getting the IV into his foot was a horrible experience but beyond that, everything went smoothly. He was back to his old self by morning and when he no longer vomited after eating breakfast and lunch, we were given the go signal to check out of the hospital. 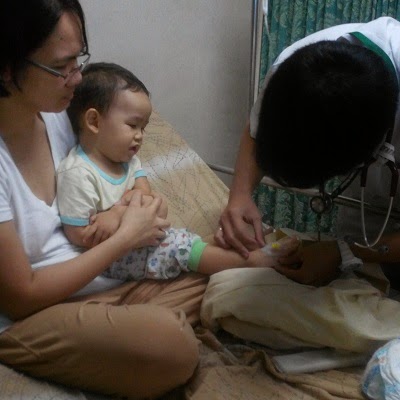 Throughout this whole experience, I was mindful of the fact that we were lucky that my mom was a doctor in that hospital and our pedia was her partner, so we didn't have to pay for professional fees. Also, even without a discount, our son only needed some very minor medication and lab works, which amounted to less than Php1,500. The biggest expense we had was our room which was a suite, because the next available room was a semi-ward where the watcher was only provided with a chair. The suite wasn't also all that grand to be perfectly honest, but at least it was roomy.

Because we checked-in during the weekend, I wasn't able to accomplish the required Philhealth forms and had to charge the entire bill on my credit card. I'll be applying for Philhealth reimbursement soon and here's hoping that I'll get a substantial refund on the Php5,700 that we spent on hospital bills.

Yup, we only spent Php5,700 on our hospital stay, so even if I don't get a reimbursement it won't really matter. But I can imagine how Php5,700 will be too much of a financial burden for others, like that beggar who brought in his 1 y.o. child to the emergency room a few minutes after we settled in our room. Thank goodness Medical Center of Paranaque has a very compassionate ER staff who waived the ER fees and even managed to find medicines for the child. Also, the doctor told me that my husband gave her money to be spent on that child's medications. I would have never known if she hadn't told me since he never brought it up. Clearly I married well :) 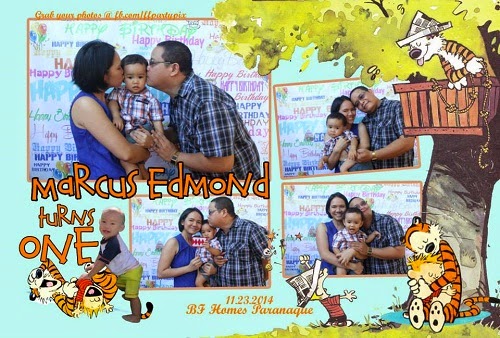 While we will never have an aspirational lifestyle that thousands will avidly follow on Instagram (guilty!), I am constantly reminded of how blessed we really are and of how little we really need to be happy.

I hope this storm runs its course soon so we can all get back to merrymaking.
Labels: health personal Philhealth

rach said…
glad to know that your little boy is well na. No kids yet but I understand what you feel since I have nieces. Di makausap ang kapatid ko pag ganyan.
December 10, 2014 at 7:25 PM

grace said…
ganyan din ang nanay ko pag may sakit ang bunso namin noon di na talaga mapakali tapos wala pang pera, good thing we have a neighbor who was a nurse before, she was a big help to us. mam jill, u are so blessed talaga to have a very cute little son & very lucky to have a kind hearted husband. It's really good to know that there are still good samaritans these days.
December 12, 2014 at 10:23 AM