The start of the year brings all sorts of resolutions, with financial resolutions such as saving more money most probably leading the pack, that's why the 52 week savings program is always trotted out around this time of the year. I started my own Project 52 sometime in August of 2013, but it became part of the collateral damage when we had to quickly come up with money to purchase the second condo unit. And truth be told, I didn't really mind because I had long abandoned it since I kept my money jar at the back of our closet to prevent tempting our househelp (I'm not accusing her of anything, but if a jar full of cash is within plain view then temptations will arise). Out of sight became out of mind and I eventually forgot about my savings program, and only remembered it when we were raising funds.

Now that I restarted on Project 52, I realized that there are two very basic rules that will help ensure its success.

First is to stick to a realistic program that takes your budget and financial capability in consideration. To quote my past post:

Jennie of Marriage and Beyond has her own version of the challenge where she puts in Php50 increments weekly, giving her a cool Php68,900 at the end of 52 weeks. The thought of Php68,900 after 52 weeks is fantastic but I don't know if I'll be able to keep up with the weekly deposits, since from week 20 onwards the weekly deposit becomes Php1,000 with the deposits reaching a high of Php2,600 on the 52nd week. This is supposed to be a fun and easy way to score some shopping money for myself and I doubt if it will be as entertaining if I have to constantly move our budget around to come up with the weekly cash.

To reiterate, this should be an easy activity that will not cause financial stress but at the same time, help you develop your savings muscle. Win all the way!

Second is to come up with a goal that will really push you to finish the program. For my first attempt at the program, I used a pretty trinket as my goal. But since jewelry doesn't really do anything for me, I didn't even flinch when I pillaged my savings for the second condo. This time though, my Php13,780 loot will go towards our upcoming Puerto Princesa and El Nido, Palawan vacation. It will form part of our spending money, particularly in El Nido since I read that there are no ATMs there and only the swanky resorts accept credit cards so there's a need to hoard on cash before going there. 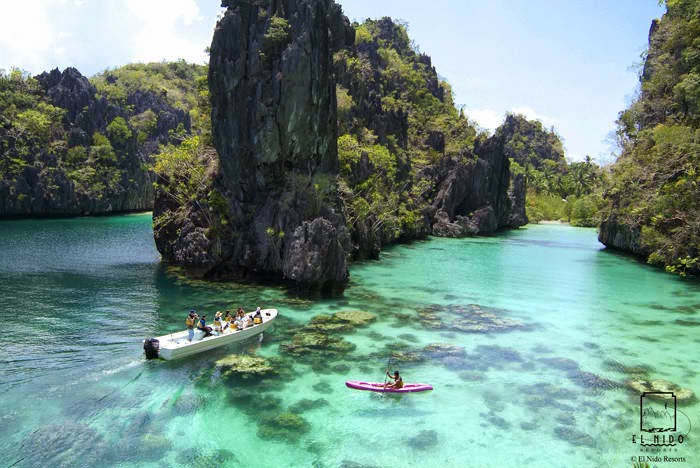 In order to fast track the 52 week program, since we're off to Palawan on the last week of April and I only resumed my savings program in November giving me less than 5 months to cram the whole 52 weeks, I've been crossing out 2-3 week increments every weekend. I would take two weeks from the top and then one at the bottom, effectively tackling several weeks in one go (please refer to the chart to know exactly what I mean). I'm almost halfway finished with the program and excited as hell to go to Palawan, so I'm pretty confident that I'll be able to complete Project 52 and soon enough, that will be me in the photo kayaking my way across the lagoon.
Labels: money saving tips savings vacation

jaki said…
I'll go on the last week of March naman and will stay throughout the holy week mostly in EN and just transit in PP. Sayang a chance for eb sana.

Gusto ko ata gayahin yong 'cheat' strategy mo. It'll give me plenty of leeway kapag tinamad na on the 26th- month, which had been the case before.

Jillsabs said…
Palawan is really beautiful! I think you can spend a good 2-3 weeks just exploring the whole island and you'll still end up wanting more.

You better include a slow tour of the Philippines as part of your Pinas for Good itinerary :)
January 9, 2015 at 12:03 PM

Jillsabs said…
I'm thinking of using Project 52 as my way to amass pocket money for future travels. Perfect kasi ang set-up niya, very easy to save up with this method.
January 9, 2015 at 12:08 PM

edelweiza said…
The hubby and I failed in that saving challenge because emergency expenses piled up while we're doing it. Pinas for Good has a point when she said in her blog post before that it should be done in reverse, saving money from the biggest to the smallest amount as the weeks go by. I agree it's going to be easier that way talaga, no pressure pa ang pagtitipid. I'll follow that strategy if ever I'd take on the challenge again. :)

rach said…
This is a great challenge especially for me (lol!)

I have actually saved the photo illustration that you have about this challenge para ma try namin. Hopefully... I can save this for my husband and I to have our first ever travel trip together.
January 17, 2015 at 7:29 PM