My Son, the Investor 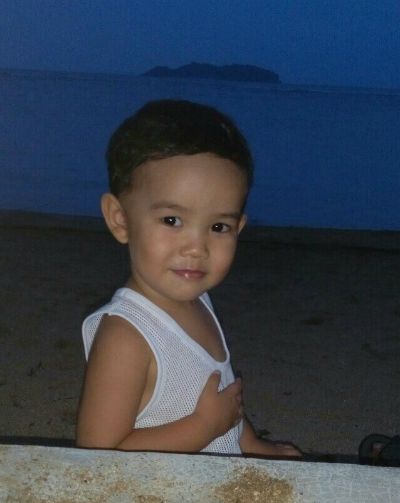 For his birthday this year, my son received some cash from his godparents. Instead of starting a savings account or spending it on toys, I opted to open a stocks brokerage account for him since I've always entertained the thought of buying stocks in my son's name considering that the yield is far superior than a savings account and it's a good way of introducing him to stocks and investing in general at an early age.


Ever since I attended the Faustos Family FQ seminar, I've been super inspired to raise my son in a similar manner. I like how Rose and Marvin Fausto made finance and investing the norm in their family. Their three sons grew up not fearing money or thinking that it was some mysterious thing that should be discussed in hushed tones. This in effect gave the Fausto boys a healthy attitude about money, as seen in the anecdote where they eagerly compared the performances of their stocks every time the annual reports came in, treating it more like a game to play and not as a mystical and magical affair.

Anyway, back to opening the stocks account for my son. Some quick Googling led me to this site by COL Me Joey and I found out that the process for opening a COL ITF (in trust for) account was essentially the same as opening a regular account, save for a few differences: 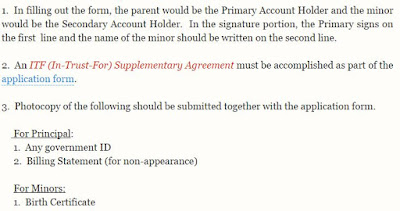 COL Me Joey also pointed out that the primary account holder should be the minor's biological parent or the legal guardian. If it's the latter, the court decision granting adoption or guardianship over the minor should also be included in the application.

I submitted the application for the ITF account via courier and in about 3 working days, I received an email from COL asking me to submit a copy of my son's birth certificate. Oooops...sorry about that. I sent an image of his birth certificate and the following day, his COL account was open. I then funded it with his birthday money (plus a little extra from mama) using my Metrobank Direct account.

Now for the fun part, choosing what stocks to buy!

While mulling over what stocks to buy for him, of course I was after getting the most possible gains but I was also looking for possible lessons that could be imparted along the way. For my not-so-scientific research, I relied on the site the DailyPik since it has a post on undervalued stocks which is updated daily based on the index performance. DailyPik bases its data on COL Financial's research but the former's is much easier to digest since it's already sifted through and has the added benefit of posting the estimated growth based on the stock's actual price and fair value.

Around the time that I was choosing stocks, the most undervalued stocks (therefore the ones with the most potential to churn out gains) were Bloomberry (BLOOM), Century Property Group (CPG) and EastWest Bank (EW). I don't remember what the potential growth rates were when I was doing my research, but I do recall that they were ridiculously high, like in the range of 70%-80%.

Some more research revealed that BLOOM operates casinos so that was a no go for me (I do not support gambling and don't want to introduce my son to it), while CPG was a real estate company ran by the Antonio family. I was more familiar with EW since I've seen its branches almost everywhere but I did not know the group behind it.

As it turned out, CPG was the company behind those swanky Paris Hilton condominiums and the Antonio family was known for their lavish lifestyle, with one of the sons even commissioning a famous architect to build his house and then proceeding to fill the house with paintings of himself (link). While EW, as well as the Filinvest real estate company, is ran by the Gotianun family. Unlike the Antonios, the Gotianuns are not known for their fabulous lifestyles and have probably never hobnobbed with It-Girls like Paris Hilton. Sure the Gotianuns rarely make it to the society pages or palangga Maurice Arcache's column but that's because they're too busy working, putting in the hours and effort to build and grow their empire.

I think by now it's obvious what stocks I bought, right? Given the choice between an ostentatious display of wealth and conservative, steadfast performance, I chose the latter. I get scared thinking of entrusting my money (no matter how small it might be) with someone who seems to be so in love with his own face, that person doesn't seem level-headed enough to manage, much less grow a business.

With the current downturn, my son's EW gains are merely at 0.71%, but considering that this is long-term investing, it really doesn't bother me.

In the event that EW share prices don't go down anymore and I won't be able to average down, I'll just buy equity funds for my son since COL also offers mutual funds now.

Okay, I have to wrap this up quickly because the carpenters will be here any minute now and I'll be kicked out of the "office" (which is really just a desk in the middle of a messy room). But before I press the publish button, let me go off-topic and knock on your hearts to help out the Syrian refugees. The last few days have been a test for humanity as a whole. Do we turn our backs and close our eyes to such suffering? I personally know that I can't directly help the Syrians but there are a lot of groups out there who are able and willing to do so, and we can send our support their way. Here's a very helpful link on how we can all help out and ease their suffering even just a little.

As always, thank you for reading this far and God bless you and yours.
Labels: COL Financial stock investing stocks