What Happens to your BPI Save Up Account After you Die 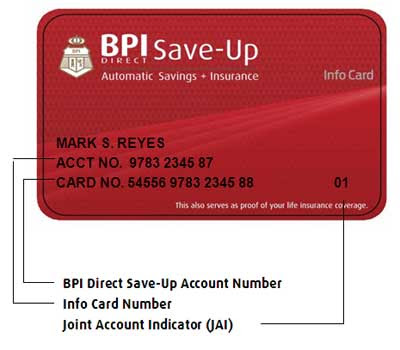 I've talked about BPI Save Up quite a lot in my blog since it really is a good product.* In a nutshell, it's a savings account with a life insurance aspect, a tie-up between BPI and Philam Life. The depositor is the insured and can nominate a beneficiary(ies) upon opening a BPI Save Up account.


So you can just imagine how happy I was to stumble upon a Supreme Court case that answered those questions.


Here's a summary of the case:


In Bank of the Philippine Islands v. Laingo, Rheozel Laingo (Rheozel) opened a "Platinum 2-in-1 Savings and Insurance" account with Bank of the Philippine Islands (BPI), Claveria, Davao City. Platinum 2-in-1 Savings and Insurance is a savings account where the depositor is automatically insured against death or disability, with FGU Insurance Corporation (FGU) providing insurance coverage. (Sounds familiar right?)


Rheozel named his mother, Yolanda Laingo (Yolanda), as his beneficiary under the savings and insurance plan and he was issued an FGU Insurance Coverage Certificate


A few months later, Rheozel died due to vehicular accident. Yolanda instructed her personal secretary to go to the BPI Claveria branch to inquire about Rheozel's savings account. The secretary was accommodated by BPI Claveria's branch manager and she was allowed to withdraw Php995,000.00 from Rheozel's account.


More than two years after Rheozel's death, his sister Rhealyn was going through his things when she discovered the FGU Insurance Coverage Certificate. Rhealyn informed Yolanda who then sent letters to BPI and FGU asking them to process her claim as the beneficiary of Rheozel's insurance policy.


FGU denied Yolanda's claim since it was filed more than 3 months after Rheozel's death.


Yolanda filed a complaint for specific performance with damages against BPI and FGU.


The Regional Trial Court dismissed the complaint, ruling that the prescriptive period of 90 days began upon the death of the insured, and not from the time the beneficiary becomes aware of the insurance policy.


Yolanda appealed the case to the Court of Appeals which then reversed and set aside the ruling of the trial court, directing BPI and FGU to pay Yolanda damages and the proceeds of the insurance policy with interest.

Since BPI, as agent of FGU Insurance, fell short in notifying [Yolanda] of the existence of the insurance policy, [Yolanda] had no means to ascertain that she was entitled to the insurance claim. It would be unfair for [Yolanda] to shoulder the burden of loss when BPI was remiss in its duty to properly notify her that she was a beneficiary.


Thus, as correctly decided by the appellate court, BPI and FGU Insurance shall bear the loss and must compensate Laingo for the actual damages suffered by her family plus attorney's fees. Likewise, FGU Insurance has the obligation to pay the insurance proceeds of Rheozel' s personal accident insurance coverage to [Yolanda], as Rheozel' s named beneficiary.

While BPI v. Laingo answers a lot of questions, it still does not address the issue of what would happen if the beneficiary had no knowledge of the savings account and/or insurance policy. The odds were in Yolanda's favor because she was able to prove that BPI had actual knowledge of her son's death, ergo, FGU was also considered to have had knowledge.


But what if the depositor because of one thing or another, neglected to inform his beneficiary that he took out life insurance? What would happen then?


It seems to me as if the best way to get notice out is to take out an obituary in a newspaper since this would serve as actual notice to everyone concerned. I'm sure every bank or insurance company has people assigned to scan the obituaries everyday to see if any of their clients has kicked the bucket. And with an obituary serving as actual notice, the family or beneficiary is released from the burden of informing each and every one of their creditors or debtors about their loved one's death.


But another way to protect your assets and your beneficiaries is to organize your financial documents and keep them in one place. Keep a summary of your bank accounts, insurance policies, investments etc in an envelope and be sure to put the envelope in a prominent place among your files. Also, inform your family members/beneficiary about this so that they won't just chance upon an insurance policy or passbook years after your death.


It just doesn't make sense to put much effort into keeping your family protected when they won't be able to reap the benefits of your hard work at the time they need it the most.


And with that said, please excuse me while I fix my own "Do not open until I'm dead" envelope.
Labels: Financial Literacy

Rosalie Flores-Bernardo said…
Thank you for this blog post! Because of your generosity with sharing your experience and knowledge, I have discovered numerous helpful tips in managing our finances :)
June 23, 2017 at 12:46 PM

edelweiza said…
Thanks for sharing this, Jill! Buti naman kumampi ang court sa insurance beneficiary. It is really important that at least one family member knows where we put our money, literally and figuratively.
July 3, 2017 at 11:48 AM

Fritz S. said…
Thank you for sharing this. This had been the most substantial article I have unearthed so far re BPI SaveUp's insurance coverage. My husband is about to undergo a major surgery, and we are preparing for whatever is to come after the procedure. He just handed to me his SaveUp card, and though his mom pa yung nasa beneficiary, we're know now what to do. Thanks again, and looking forward to more helpful articles from your site! 😊
October 10, 2018 at 9:09 AM

Be sure to change the beneficiary of the policy (i.e. from his mom to you). Not to be morbid, but it's better to deal with potential issues ASAP before they become full-blown complications.

Best of luck to your husband on his upcoming surgery! Sending good thoughts your way.
October 12, 2018 at 5:43 PM