How to Get a Police Clearance from Paranaque City

*Update as of June 19, 2018: Bad news folks, PNP Paranaque City has a new service provider for the police clearance cards and certifications and it's experiencing a very painful birthing process, so what only took 30 minutes from start to finish before, will take upwards of two hours now. I recently had to get a police clearance and it took me almost 3 hours to get cleared. Be prepared for a lot of lining up and waiting in a hot, muggy and jampacked area. Bring a fan, a bottle of water, something to amuse yourself with and a lots and lots of patience.

I'm hoping that the new service provider will be able to resolve all its issues ASAP and that the local government will be able to come up with workable system and provide on the ground assistance since confusion was rampant in the two days I went to the police clearance area with only one local government employee available for questions (the same guy who was issuing the order of payment and makeshift numbers).

Paging Mayor Olivarez! Your constituents are suffering! Please do something. I have seen how efficient the police clearance process used to be and have also been witness to how easy it was to have my driver's license renewed in Paranaque City. The existing chaos at the police clearance center is a pox on your good record and should be dealt with ASAP.

Maybe you can deploy some of the municipal employees who oversee the number queueing machine at the treasury department to the police clearance area to herd the restless crowd. Last time I went the treasury department, there were three people sitting in front of the machine doing the same function. I'm sure one or two of them will be more than capable to provide on the ground assistance at the police clearance area.

But for anyone out there who needs to get a police clearance from Paranaque City, you have been warned so act accordingly. (end of update) 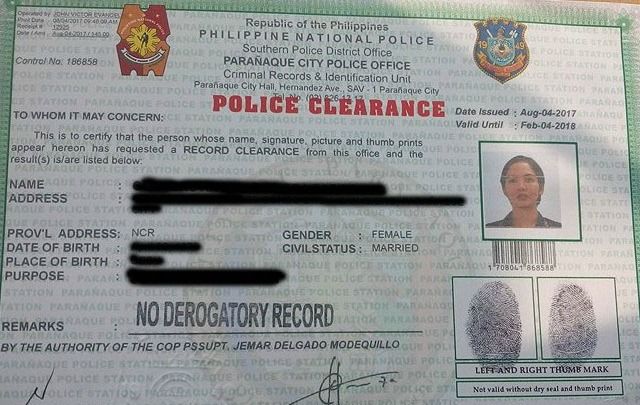 I recently had to apply for a police clearance from Paranaque and I took a leave from work just to get this done in anticipation of the long lines and the usual time consuming, patience reducing ordeal when it comes to applying for any government document. But I was pleasantly surprised to find out that getting a police clearance was actually a painless and hassle-free experience! Good job to our Philippine National Police and the Paranaque city government for a very efficient and streamlined operation! Read up for the details.

The only requirements to get a police clearance from Paranaque are: (1) barangay clearance and (2) cedula. Please note that I can't speak for other cities or municipalities because I've only transacted in my own city.

To get a barangay clearance you have to present either an ID indicating your barangay OR a certification from your homeowner's association attesting to your residence.

I went to my barangay hall, showed my driver's license to the receptionist and was told to fill up a slip of paper with my personal details and what I'll be using the clearance for. I paid Php25.00 to the cashier and had my clearance in 10 minutes.

Next up, the Paranaque City Hall.

I approached the information booth which had 3 millennials manning it and asked where to get a cedula. I was directed to a table where I then filled out a slip of paper. I submitted this slip to a lady in the cedula section.

She looked at the slip of paper and asked if I really wanted to declare that income since the price of the cedula will depend on it. She said that the cedula fee can range from Php20 (if you're unemployed) to Php5,000 (for declared personal income of Php10M up).

I was tempted to declare myself as unemployed or at least declare a lower income, but I just shoved those feelings aside and reminded myself that I needed all the good karma I could muster for my upcoming application. My cedula fee was the highest I've ever paid and I got a little woozy when I handed over a Php1,000 bill. But right after me was a well-coiffed and sosi lady who was assessed with Php3,500 for her cedula, which begs the question: How much income did she declare? Also, how can I be her in 20 years time?

I got my cedula immediately after I paid and so it was off to the police clearance area, which was practically right beside the cedula area.

First stop was window 1 where a lady asked about the purpose of my police clearance application. After I answered, she gave me a sheet of paper and instructed me to go to the cashier and pay the police clearance reference fee of Php110.

The cashier was about a minute's walk from the police clearance area and right across the cedula area. I was immediately attended to since there were about a dozen open counters.

By the way, all the payments I made were properly receipted and there were no insinuations that extra/special fees needed to be paid.

Next up was to line up for the manual fingerprinting (3-5 minutes).* Afterwards, I stood in another line for the digital thumbprint and photo-capture (5 minutes).

Finally, I just needed to wait for the release of my clearance and clearance ID. This probably took 10 minutes max and I was out of there with my precious police clearance in my (literally) grubby hands.

Including my commute, I was back in my condo 1.5 hours after I stepped out for my clearance chores. That's how fast it took. Amazing!

Thanks so much to the San Isidro Barangay Hall, Paranaque City Hall, and Philippine National Police for proving this skeptic wrong! This is how our tax money should be spent, on efficient services and helpful government employees.

*Update as of June 19, 2018: The manual and digital fingerprinting were removed by the new service provider. But the steps are still pretty much the same.
Labels: Life amp; Money

Amor said…
Thanks so much for the review! I was actually searching for an updated version and ended up reading yours. My dad is getting a passport and among the list of supporting documents required by DFA the Police Clearance is the easiest way to get one, at least in his current status. Thanks so much for sharing 😊
August 19, 2017 at 6:42 PM

Cathy Taganna said…
***Hi Ms. Jill! Have you ask if its still possible to get a Police Clearance if you don’t have a Barangay clearance and you substitute it with 2 valid IDs instead? I've read previous blog about this and there was an option of photocopied 2 valid IDs, if you don’t have Brgy. Clearance??? Would this work? Appreciate your response. :D
August 23, 2017 at 3:32 AM

But this is just my take on the matter, and I could be wrong, so it's best to ask the police clearance center in your area because they might have their own rules.
August 23, 2017 at 6:42 AM

Paranaque resident said…
Why does we need to pay 2 fees??
Police clearance at treasury -110
And
Police clearance ID at window 2 - 145
And why we don't have the option to choose if we want to buy the Id or just the police clearance because 145 is to much for some

I have no idea why the police clearance fees and procedure are like that. I have the same questions you do.
September 7, 2017 at 7:51 AM

Were you issued a police ID for when u applied last this April or just police clearance form?