I once tracked my income and spending through a very old-school pen and paper method. I liked the whole exercise of jotting down every single one of my expenses because it made me accountable for my spending and my OC self liked seeing my expenses on a daily basis (it was sort of like a diary but without the teenage angst). But what I didn't like was tallying all those items up at the end of the month. It was just too much of a hassle to go over each and every line and then tally them per category.


I became to dread the monthly tallies so much that I once went for 5 months without summarizing my monthly expenses. Sure, I continued to jot down my daily expenses but all of that raw data was useless without a summary. Eventually, I gave it all up, reasoning to myself that I pretty much knew our budget so there was really no need to go on a cellular level.


However, ever since my husband began tallying his own income and expenses using Google spreadsheets, I began to miss the nerdiness of listing down expenses vis-a-vis income. I knew I enjoyed taking note of my spending but I just did not like the end of the month round-ups.


So feeling like a millennial, I searched for an app that would satisfy my needs. I wanted an app that was just a step or two up from the basic pen and per method, but would generate monthly reports. No bells and whistles please, my tita brain refuses to process anything more than what I know I need.

A quick search through the Google Playstore showed that there were hundreds of budgeting apps. I quickly set aside the apps that required monthly payments and those that sync with bank accounts. After a few minutes of searching and reading reviews, I settled on Fudget. 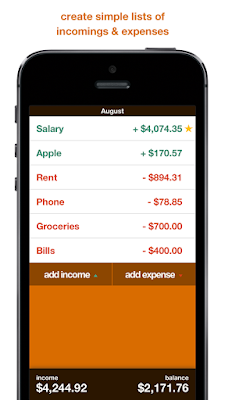 Fudget or Fast Budget is a "simple and fast alternative to feature-rich, complex budget planner / personal finance apps. There are no categories to manage, no charts to interpret and no learning curve."


What I like best about Fudget is it is pretty much just a ledger. But now instead of taking out an actual notebook and writing down Php70 for my daily commute, I just type it out as Transportation.


The pie chart for expenses is also simple but satisfying. 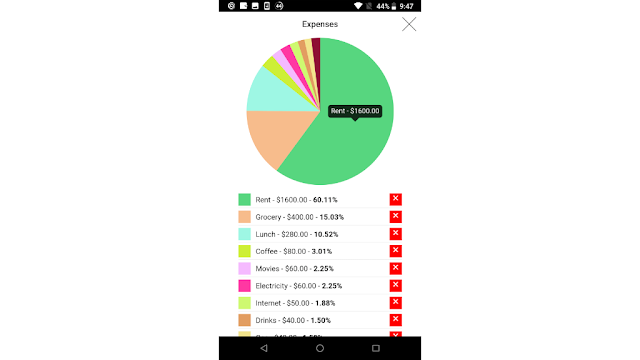 What I don't like about Fudget though is I can't figure out how the date function works. I know how to make the date entry appear, but to actually input the date is something that I still haven't figured out. It seems quite random really, sometimes the calendar appears when I tap on the date cell and sometimes it doesn't. I'm thinking that maybe it follows some pre-set internal clock and that the date option only appears when the internal clock reaches a certain time or date? I really don't know and I'm honestly stumped. I'd like to call in a lifeline please.


But aside from that date conundrum, I'm a happy camper with Fudget and will most probably upgrade to the paid version of US$1.99 to get the calculator, themes and syncing capability, but really mostly just to say thanks to the developer.


I've been using it for a month and a half so the data is not yet conclusive, but the pattern for now shows that the majority of our expenses veers towards debt payment with mortgage payments a distant second. I'm still logging in credit card payments under Credit Card Payments because those are past expenses which I'm just paying for now. But since I'm now listing down charged expenses in real time, I'll be doing away with the credit card category probably by the middle of this month or by next month.


Just like with most things in life, Fudget is solid proof that simple and straightforward is usually best.
Labels: apps budget monthly budget review

M said…
I use Toshl because unlike most apps, it also has a Web version. I haven't really tried tinkering with its other features, some of which require you to upgrade to a paid version (30-day trial, I think), but so far I'm happy with it.
June 26, 2018 at 1:18 PM

choose simple said…
I also saw this app when I was looking for a simple and reliable money management app but I didn't download it then. Reading your review, I had a change of heart and downloaded it just now. Thanks for your review!
June 28, 2018 at 10:47 AM