Frugality as a Way of Life 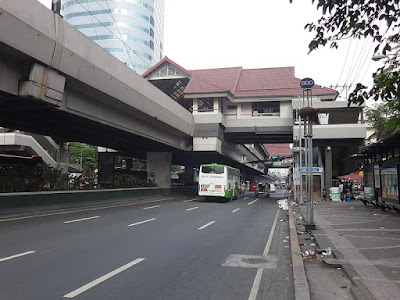 People are usually shocked when they find out that I'm already in the office by 6:30AM, sometimes even as early as 6:15AM. That means I wake up at 4:30AM and am riding the FX by 5:45AM. No, I'm not gunning for the Employee of the Millennium Award, that's simply how I deal with and survive icky Manila and its roach infested, flood prone and jampacked streets.

I used to bring a car to work everyday and would only use public transportation during coding days. I would leave the house by around 6:15AM to make it just in time for the mall parking to open by 7:00AM. On my ride to work, I have to put on my defensive driver mode due to the general lawlessness prevalent on our streets, with both drivers and pedestrians, but mostly drivers, chucking out civility and courtesy in an effort to get where they're going and to get there first at all costs.


After depositing my car in the almost empty parking lot, I walk up the steep and dark parking ramp and walk about half a kilometer to my building. I pass people with brown envelopes clutched to their chests, employees with still wet hair barreling through the crowd, students rubbing the sleep from their eyes, beggars trying to catch the eye of a passerby and all shapes and types of humanity. And we all traverse the roach infested, spittle strewn and flood prone streets of Ermita Manila. By the time I reach the office, I am tired and I smell like smoke. The ride home is a little harder because rush hour traffic has to be factored in by then.


On the other hand, when I take public transportation, I merely have to ride a jampacked FX and close my eyes and pray to God several times during the trip to let me live through the day because FX drivers are f*cking lunatics. I still have to walk to get to my building, but the distance isn't that much farther and it's slightly more pleasant because it's not yet as hot and the crowd isn't as thick yet. It also costs me significantly less, costing only about Php1,500 per month while further extending the life of my 11 year old car.


Aside from the obvious savings, what I like best about commuting is that it allows me to zone out and listen to my podcasts or audiobooks. Instead of fighting through the traffic, I get the privilege of putting my life in someone's reckless hands, renewing my faith in God on a daily basis, while I listen to people's stories and thoughts on personal finance and life in general. I get to work on my mindset while the FX careens through the traffic and the office is practically empty when I get there, so I get to enjoy the silence and decompress while preparing myself for the upcoming work day.


I don't see commuting as a sacrifice or a way of saving money. It's just the way I prefer to get to work which also happens to save me money. Apparently, that's how most frugal people think. They don't make a deliberate effort to save money, they just choose options and develop habits that have the effect of saving them money. It is never a sacrifice because there's no feeling of deprivation, it's a way of life and one they, we, embrace wholeheartedly.


Frugality gets such a bad rap because YOLO is the norm being marketed, thus the incessant push to live life to the fullest a.k.a. to spend your way to a better life. But it's precisely because I only have one life to live that I want to give myself and my family the freedom of time and the privilege of options that's why I do what I do. In the same vein as my commuting, I am also not attracted to designer brands and don't subscribe to the "I deserve this" marketing ploys. Again, I don't feel like I'm depriving myself with my no-name, local bags and shoes and my non-Instagrammable life because that's the life I choose to live, there's no sacrifice there.


Ok, so maybe I exaggerated just a wee bit in my last sentence. If I had a choice, and the purse power to back up that choice, I would choose get a driver to shuttle me back and forth to work everyday. That way, I would get to skip the stress of driving in Manila while going to a job I actually enjoy and thrive in. But grimy Manila is a small price to pay for doing what I do with the people that I do it with, so nope, a sardine-like commute is still not a sacrifice. It is just a not so pleasant facet of my life, at least for now.
Labels: money saving tips Psychology of Money

Jun said…
I love this little rant for frugality and anti YOLO. We are a bit lucky to live in a time where we have choices,, instead of being forced into certain lifestyles. Certain people are shocked that I sometimes take the jeepney to work when I certainly can afford a driver and car/s. Granted I probably am stealthily the highest net worth individual in many cases in the jeep doing that but there is some smug satisfaction in doing so and knowing you chose the frugal lifestyle.
FF is certainly worth the discomfort of it all so kudos for keeping your focus, Jill. I find comfort in non YOLO misery and in this community of like minded people.
December 2, 2018 at 6:36 AM

George@forever20somethinglawyer said…
You're so badass Jill! I've always contemplated taking a bike to work but the absence of a bike lane and unsafe drivers always scare me.
December 4, 2018 at 11:42 AM

Didi said…
I do love commuting! I take comfort in the fact that I just sit down and yes eavesdrop, sleep, read or do WTH I want to do. Added stress pa to drive plus gastos. So I do love commuting. Keeps me in touch with the daily grind of the world too.
December 5, 2018 at 12:30 AM

Jillsabs said…
That's the first time I've ever been called badass, it feels weird and undeserved:p

Re taking a bike to work, those that do bike to work are the real badasses. Buwis buhay every time they pedal along our crazy roads and even crazier drivers.
December 8, 2018 at 7:59 AM

Jillsabs said…
We really are lucky that our frugality is borne out more of choice than necessity. Or maybe it was at first due to necessity then when you get used to it, it becomes intertwined with your life.

I'm still so far away from financial freedom! Got more grinding and strategizing to do.
December 8, 2018 at 8:02 AM

Liz Lanuzo said…
This is such a well-written article, Jill. I've been reading this blog regularly ever since you started it. You're doing a great job here!
December 13, 2018 at 10:06 AM

And I agree with you.

Jillsabs said…
Perils of the job. You just have to find the silver lining in everything you do to keep your sanity.
January 13, 2019 at 6:56 AM