Thoughts of a First Time Showbuyer 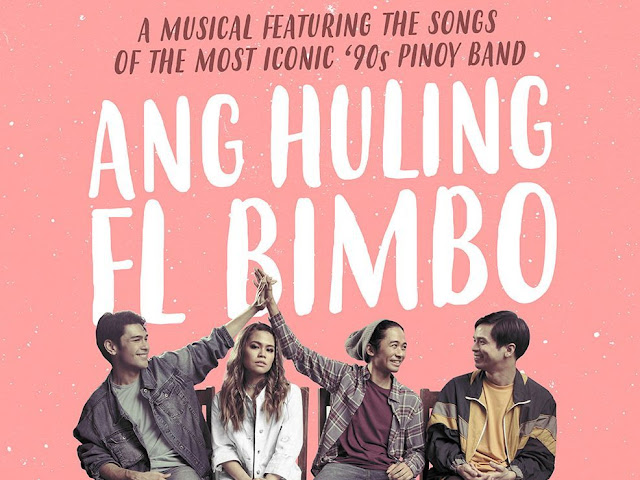 One of my law school blockmates, together with his fraternity, bought a showdate for Ang Huling El Bimbo the Musical's first run last year. There were 5 shows for the first run and all 5 shows were sold out.

About a dozen of my blockmates saw the first run and they were so moved by the production that when rumors of a second run came up, they eagerly signed up to buy a showdate and sold the idea to the rest of us. I joined in a heartbeat because Eraserheads plus a first run that sold out? A show that will literally sell itself? Where do I sign up?! It seemed like an effortless way to get at least a 20% return on our investment.

Or so we thought.

Let me just jump to the end of the story and say that we did not lose any money in the endeavor but we didn't make 20% either. We made way, way below 20%, as in lower single digit level (cough2.5%cough). Also, getting to break-even took a tremendous effort on our part, but despite all of that, I would do it all over again.

I always thought that I could never sell anything, because I just don't have the personality and chutzpah to move products or ideas. However, the sight of hundreds of unsold seats and the thought of losing our Tokyo budget forced me to hustle like I've never hustled before. Pakapalan na ng mukha, in short.

But if I were to do it again, I would definitely think twice about buying a show from Resorts World because it did not effectively market the show leading up to the opening. In fact, I don't think it even marketed the show outside of the posters INSIDE Resorts World. I found this really surprising because isn't Resorts World famous/notorious for its radio ads? I mean that female voice whispering "Resorts World Manila" was all over the airwaves a few years back. It also has billboards all around the airport area, but I did not see a single billboard for Ang Huling El Bimbo. Yup, I'm still very disappointed about it.

In fairness though, the cast members had some radio and TV appearances a week or two before the first show opened and Full House Theater Company really made a valiant effort to market the show through social media, but this was clearly not enough or was a little too late, thus the first weekend did not break-even.

When it became clear that the show wasn't going to sell itself, as we all thought it would, and Resorts World wasn't going to help out, we had to do the selling ourselves, thus the roller coaster of emotions for the past few months. From the high of selling 10 tickets in a single day to getting seen-zoned dozens of times, I went through it all.

It really helped that my friends and I were together in this experience because I had someone to share my ups and downs with. This show became so much more than a mere investment that when our showdate closed to a standing ovation, I was probably as euphoric as the cast members. I had my heart wrenched out by the production and I couldn't stop humming Eheads songs for the next few days, but the overriding feeling was one of relief that it was finally over and I could go back to my humdrum life.

Now that my emotions have mellowed down and I can think things through rationally, my takeaways as a first-time showbuyer are as follows:
Ultimately, it's just money and the piddling returns have not turned me off from going into a similar venture in the future because the experience obtained from this venture was well-worth the effort. However, it's highly unlikely that I will dip my toes into showbusiness in the near future because I still have to recuperate from the last show. Mahirap pala talaga magbenta.

If you haven't watched Ang Huling El Bimbo the Musical yet, I highly encourage that you do because despite the very sad ending (you have been warned!), the nostalgia factor alone is worth your time and money and the performances are just jaw-dropping. They've added another showdate so it will now run until April 12. Tickets are available at Ticketworld.
Labels: Entertainment entrepreneurship

Mai said…
I feel you, Ms. Jill!:) I also thought selling isn’t for me. And yes, sobrang hirap magbenta tapos iseseen-zone ka, marereject, and some people closest to you will not be as supportive pero despite everything, maraming lessons. One of the best things I learned it selling is that it made me humble and treat people nicely even if they reject me for a lot of times 😊. And I like what you said to work with people who hustle as hard as you do, agree ako dito dahil sila ang mga taong magmomotivate at makakaintindi talaga sa atin:)

George@20somethinglawyer said…
Interesting points Jill. Was always under the impression that the play's producers shoulder the entire cost of production. In a way, parang din kayong nag pa block screening ng isang movie. so bongga pa din despite the limited profit
March 25, 2019 at 6:15 AM

Katie Scarlett said…
Thanks for sharing your experience, Jill. I have always been intrigued with this kind of investment ever since I heard a college friend doing the same and bragging about their profits. Your post made me realize that there's always another side to things (and investing for that matter). I've seen a lot of Facebook friends saying great things about the show so congratulations on that front.
March 28, 2019 at 12:02 AM

Liz said…
I also thought before that I couldn’t have a business because I don’t know how to sell. Then I set up a business and spent the first year completely lugi figuring out how to sell our services and eventually products. Still figuring it out. But like you, the lessons and experience is worth it. I believe that selling well and at a good profit is the best way to increase one’s net worth in the shortest amount of time. Super risky though. But now I am worth millions of pesos and I say this not to brag but to marvel at how this is something I never thought would happen to me. Selling is probably one of the most important life skills that nobody teaches us in school.
May 10, 2019 at 6:39 AM

Jillsabs said…
Selling and managing money should have definitely been taught in school.
May 13, 2019 at 5:40 PM