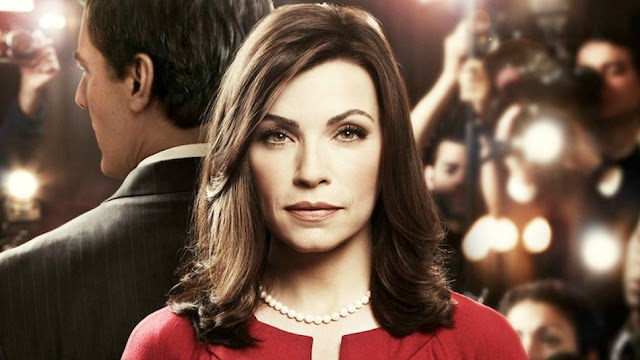 Of course, Alicia Florrick had no choice but to go back to work after her husband was imprisoned, because there were bills to be paid and children to clothe and feed. There was a palpable feeling of desperation at the start as she tried to revive her legal career through any way possible, but through sheer grit and with the help of well-meaning people who gave her a chance, she pulled through and did it in style.

When I turned 40 this year, it was as if something clicked, or maybe I just finally acknowledged what had been hovering all this time: That this is it. There is no dress rehearsal for life. This sometimes messy and chaotic, but oftentimes steadfast and humming existence, is my life. It's the life I cobbled together with my husband and children, using the foundation and advantages given to me by my parents and social standing.

I can live the next 50 or 60 years of my life (if I'm lucky) working on improving my life and helping those within my sphere of influence, and I would take my last breath content with the knowledge that I did my best. I have no delusion that I can make big, systematic changes because I just don't have that pull or power. But I can make sure that my sons' yaya will be able to put all three of her boys through to college so that they will have more options than she or her husband ever did. Given the scope of my actual influence and capability, that is all I can realistically do, at least for the time being.

The waiting continues and while I pray that the results be delayed by a month or two so that I can qualify for some of the year-end bonuses (sayang yon no!), a big part of me also wants to know ASAP and just get it over with so that I can finally move on from this state of limbo.

If I get the appointment, I'll be making an Alicia like pivot and implement a lot of changes within my immediate family and take on heavier responsibilities. But if I don't make it, I will have the luxury of plotting and preparing for my next pivot.

I love where I am right now and the people I work with, but I only have one life to live and there's a myriad of opportunities out there that I'm eager to sink my teeth into. And so whatever happens, this girl will pivot. Hopefully, that pivot will lead me to a place where I can grow and help people with their own growth, and not leave me flat on my face.
Labels: career Entertainment personal

George@20somethinglawyer said…
I hope you get appointed Jill! It will also be interesting to see your posts as a judge..
August 18, 2019 at 4:48 AM

Katie Scarlett said…
I'm always looking forward to your updates Jill! What you just said struck a chord with me, esp about realizing that at a certain point, you realize that THIS IS IT. I hope you get the judgeship (is that the right word?) right after you get your bonuses.
August 21, 2019 at 7:01 PM