Skip to main content
Labels
Posted by Jillsabs May 23, 2020

Paluwagan originated from the word "luwag" and is a collective savings arrangement between a group of people. The idea is that all the members of the group pitch in the same amount every month and then the entire pot goes to one member. Another member then gets the pot the following month until all the members get their turn receiving the collection.

The bedrock of paluwagan is trust and if you're new to an office or a company and you get invited to join an existing paluwagan, then that implies that your colleagues see you as a trustworthy person.

With trust being of primordial importance in a paluwagan, I was initially skeptical about online paluwagans. Upon further study, I then became convinced that you have everything to lose and nothing to gain when you join an online paluwagan.*

Online paluwagan operates on blind faith and not trust

Trust is generally earned and bestowed only to those who have proven that they will honor and respect the  trust given to them. Thus, anyone who extends his or her trust merely on the basis of good faith will most probably regret such a foolish action.

In a traditional paluwagan, membership is by invitation, that way, members can vet each other and ensure that the savings arrangement will go seamlessly.

But it's not the same with an online paluwagan which is operated by an administrator who opens up group membership to the entire internet. The administrator vets an applicant by asking basic information such as his/her complete name, email address, social media accounts, home address, proof of billing, copies of at least 2 IDs and contact numbers of at least 2 family members.

Think of the friend you lent Php500 to a few years ago but who hasn't paid you back. You knew that person and you probably asked for your money back at some point, but still you did not get repaid. So imagine being part of an online paluwagan where you do not personally know the administrator or your co-members, how difficult do you think it will be to get your share of the pot when the members or the administrator suddenly disappear right in the middle of a payment cycle? Answer: Very difficult.

Difficult to enforce your right

Paluwagan, whether online or in real life, is a contract between the members. Whether or not a member signs a contract, a contractual relationship will still exist because a contract is created when at least two people come to an agreement and not when the agreement is put on paper.

In an online paluwagan, the administrator charges a separate fee which is usually equivalent to one "hulog", and this is meant to serve as his or her fee for keeping house (i.e. ensuring that members pay on time and that pay-outs are made as scheduled). The fee also serves as insurance, guaranteeing that the member on deck will get his or her pot on schedule even if some of the other members are late with their installment.

If a member is late with an installment, then the administrator has the obligation to follow-up on it, which is why current social media accounts are needed so the administrator can remind the member or call upon the member's family members to help out.

Some online administrators threaten that delinquent members can be slapped with criminal cases (i.e. online scam, theft, estafa etc), but since online paluwagan is contractual in nature, I think that a civil case for specific performance is the most that can be filed against a member. But it's a different matter altogether with the administrator who may also be held liable for estafa aside from a civil action, if he or she runs off with the entrusted funds.

Sure there are judicial remedies available, but they will cost you time and money. For that matter, would you even know who to file a case against, as only the administrator generally knows who the members are? Additionally, if members do default, will the administrator take the necessary steps, aside from social media shaming, to ensure that the defaulting members pay-up so that the other members get what's due them?

These are the hard questions you have to ask before joining an online paluwagan.

Installments made are more than the actual payout

Here's a typical example of an online paluwagan for a Php10,000 payout. 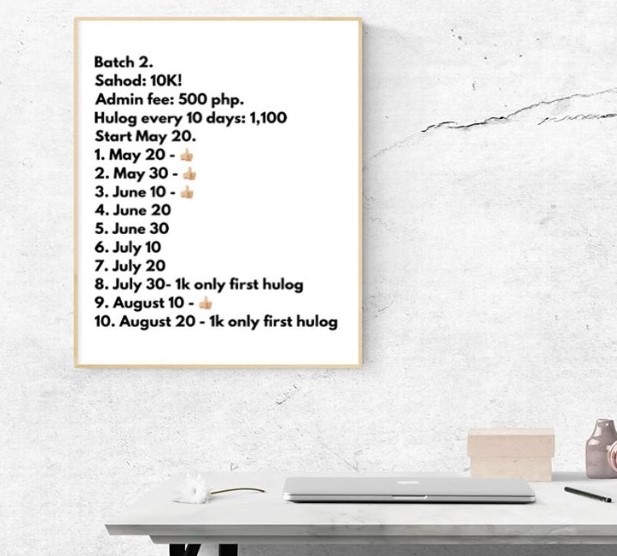 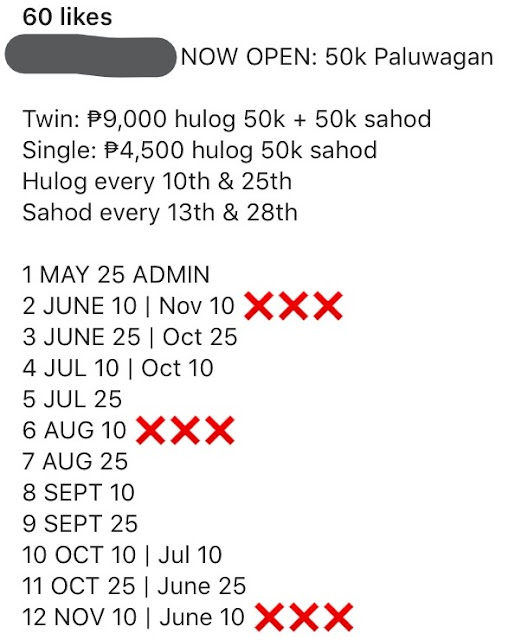 So even if your scheduled payout goes off without a hitch (i.e. all the members pay up and the administrator wires you your share) you still end up losing money.

The one good thing I can see about online paluwagan though, is that it helps develop the discipline needed to regularly save money. But if all you want to do is save money, there are far riskier ways of doing it than joining an online paluwagan:

1) You can save your money in a piggy bank. You are only accountable to yourself and there's no danger of your money disappearing, unless you lose the piggy bank or it gets stolen. Better yet, earn a teeny tiny amount of interest from your savings by putting it in a savings account.

2) If you can't trust yourself to not touch your savings, you can entrust your savings to a trusted friend and then get the entire amount once you reach your goal.

3) Open a traditional paluwagan with trusted friends or colleagues. You won't need to pay an administrator's fee so you'll get back exactly what you put in.

To wrap up this post, stay away from online paluwagans as they are inherently risky and even if you surmount the risks involved, you will still lose money. It's a high risk - no return gamble, making it a resounding NAY for me.


* By the way, I'm talking about the online version of the traditional paluwagan, not the pyramid schemes masquerading as online paluwagan which became subject of an SEC notice.