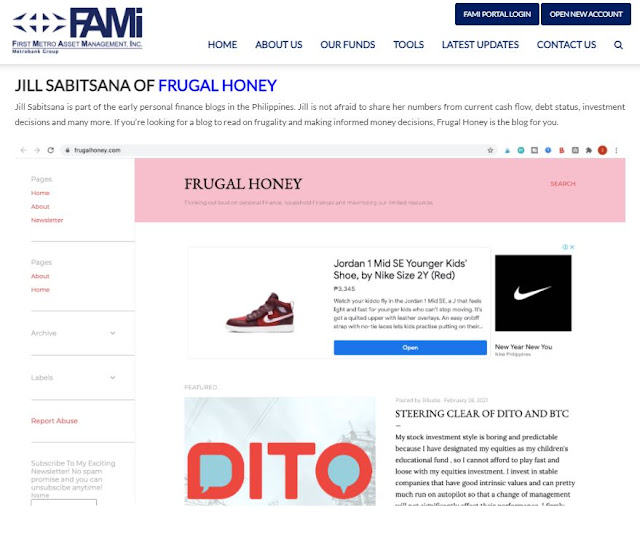 A few weeks ago, I was delighted to find out that my blog was included in First Metro Asset Management, Inc's (FAMI) list of female financial bloggers to know. But what delighted me even more was seeing more new names together with the established lodi financial advocates (i.e. Rose Fres Fausto). Only good things can come from having a financially literate and smart population, specially a more financially smart and financially savvy female population.

Back when I worked in the Senate, I used to go around different barangays and lecture on Republic Act No. 9262 or Violence Against Women and Children Act (VAWC Act). Every single time during the open forum, one wise-ass man would jokingly ask: "Why is there a special law for women? What about the men?" And this would be met with gay laughter among the predominantly women audience.

The women laugh because our audience was composed barangay health care workers, social workers and barangay officials. They are empowered women who can assert their rights and know what they bring to the table, that's why they can laugh at the seemingly ridiculous question. But then I point out that not everyone is like them, not everyone has the means or support to leave an abusive relationship.

The VAWC Act is groundbreaking in that it recognized the different types of abuses that women, and their children by extension, experience in a relationship and then provided a legal remedy against them. Physical abuse is easy to spot, but the law also recognized psychological violence and economic abuse. Economic abuse is defined as:

D. "Economic abuse" refers to acts that make or attempt to make a woman financially dependent which includes, but is not limited to the following:

1. withdrawal of financial support or preventing the victim from engaging in any legitimate profession, occupation, business or activity, except in cases wherein the other spouse/partner objects on valid, serious and moral grounds as defined in Article 73 of the Family Code;

2. deprivation or threat of deprivation of financial resources and the right to the use and enjoyment of the conjugal, community or property owned in common;

Anecdotal evidence abounds of women staying in abusive relationships because they and their children need the husband/partner's financial support or because they don't have outside support who will help them get back on their feet after they break free from their toxic relationship.

Being financially savvy is not a guarantee that the woman will break free from an abusive relationship though (because she might also have fallen victim to psychological abuse and has become dependent on her partner), but at the very least, it creates options for her and might give her that much needed push to end the abuse on her own terms.

Which is why I'm super proud of the work we did in the Senate because those seminars usually led to discussions on recognizing neighbors who were experiencing abuse, or realizing that what was happening to them was in fact categorized as abuse, and then learning that as concerned neighbors they had the the authority to step in and help out. Filipinos are naturally chismosos/as and kind-hearted so let's use those to our advantage, shall we?

Ok, this post has gotten way off tangent. Let me circle back and thank FAMI again for recognizing my blog and other* personal finance bloggers/ advocates. Also, I'd like to end by emphasizing two things: (1) money is so much more than for buying luxuries because its ultimately role is to give you options; and (2) reach out and give your support generously because everyone is having a hard time but some are just better at hiding it than others.

Unknown said…
Great post as usual Jill! I also believe that there is a need for content that will focus on the specific and unique financial needs of women. Thank you for your efforts in the Senate to empower women.